The Lubar Institute for the Study of the Abrahamic Religions closed in June 2016. This web site will not be updated, and remains online as part of the University of Wisconsin–Madison’s public archive.

Rohany Nayan honored as one of four 2012 University Outstanding Women of Color. 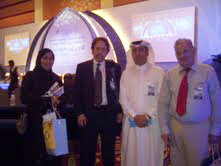 LISAR Assistant Director Ulrich Rosenhagen helped narrate a documentary produced by Wisconsin Public Television telling the story of Mildred Fish-Harnack, the only American woman executed on direct orders of Adolf Hitler. Titled "Wisconsin's Nazi Resistance," the documentary told Fish-Harnack’s story, including her upbringing in Milwaukee, her education at UW-Madison, her marriage to German scholar Arvid Harnack and her travels to Berlin where she spent her time working in Nazi resistance circles. The documentary was recently covered by ThirdCoast Digest.

LISAR staff and students enjoyed the opportunity to promote interfaith dialogue at the Social Justice Fair of the Multicultural Student Center.

LISAR Director Professor Charles Cohen was one of the invited panelists for the Wisconsin Academy of Sciences, Arts and Letters "Perspectives on a Post-9/11 World," an afternoon of discussion and reflection on the 10th anniversary of the terrorist attacks of 9/11. The event was held Sunday, September 11, 2011 in the MMoCA lecture hall at the Overture Center. The panel can be viewed on the City of Madison website.

LISAR Professor Charles L. Cohen gave a brown-bag lecture for Dialogue International on "Tales of Two Sons-Isaac and Ishmael" on Tuesday, March 1st at the Pyle Center. Professor Cohen discusse variations among the Abrahamic faiths and led participant discussion into what those variations mean for interfaith conversations. 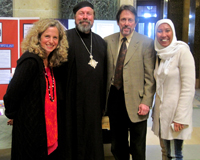 LISAR Director Professor Charles Cohen gave an exclusive lecture at the Dead Sea Scrolls exhibit at the Science Museum of Minnesota on Saturday, September 25. The exhibit was part of a worldwide tour of the Scrolls, on loan from the Israel Antiquities Authority.

LISAR congratulates Karen Turino for having won two awards for her excellence as a UW staff member, including a 2010 Classified Employee Recognition Award from the UW-Madison campus. To have won two in the same year is a tremendous achievement.

The second Undergraduate Journal is complete! Congratulations to LISAR's Assistant Director, Ulrich Rosenhagen, and the contributing Fellows who made the 2010 Journal possible.